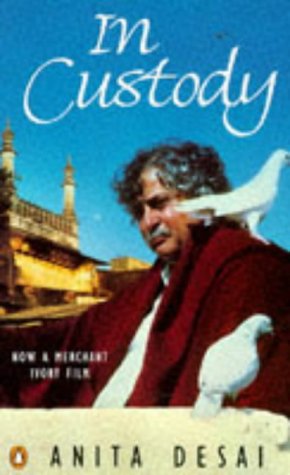 This book had been sitting hidden between two hardbacks on the top shelf in my study. And then last week in one of my book culling sessions it inadvertently came to my attention. I remember purchasing it from a charity shop some two years ago. Now that I have read it in three quick bouts lasting three days I am astonished I should have overlooked one of Anita Desai’s best books.

Written in an old fashioned traditional literary fashion it is about a meek and self-effacing lecturer in an obscure college in a small equally obscure town. He meets an old school friend Murad who invites him to go to Delhi to interview a famous poet, probably one of the best and arguably the last Urdu poet still alive, for it is feared that Urdu language is going to die rapidly in post independent India. He sees a chance to achieve fame and fulfil his dream. But the venture turns into a disaster when he finds the poet is an old weak man whose creative genius is no more. He finds himself getting sucked in deeper and deeper with no way out. What possessed him to leave his safe, mediocre world?

In Custody is a deft and savage comedy, resonant and realistic. It is a story related in a captivating way that brings alive the sight and sounds of poverty stricken recently independent India. It is no wonder the Ismail Merchant duo had turned it into a very successful art film.